Resources for Chambers and the Companies Serving Them

By Chris Mead and Greyson Jones –

And now there’s another field where women are moving into the majority: chamber of commerce leadership.

The share of chamber of commerce staff leadership in women’s hands rose from 41 percent in 1986 to 63 percent in 2019, according to a new study. 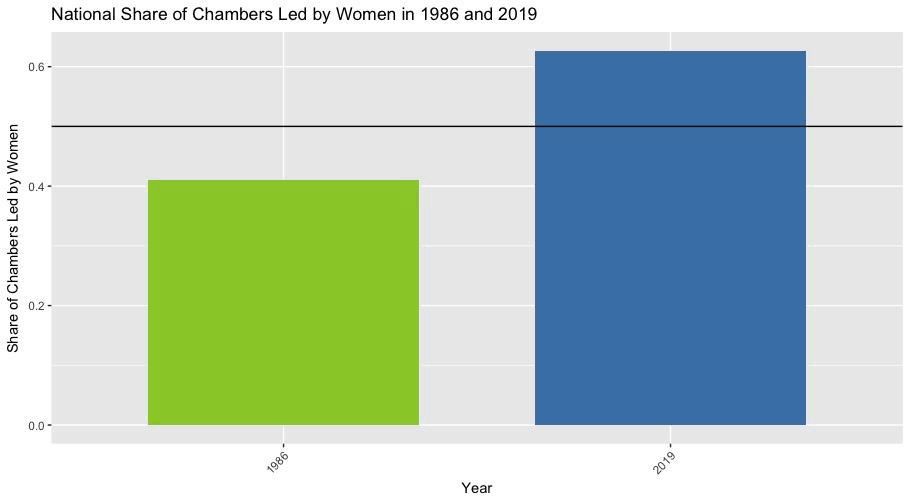 Here is the state-level view: 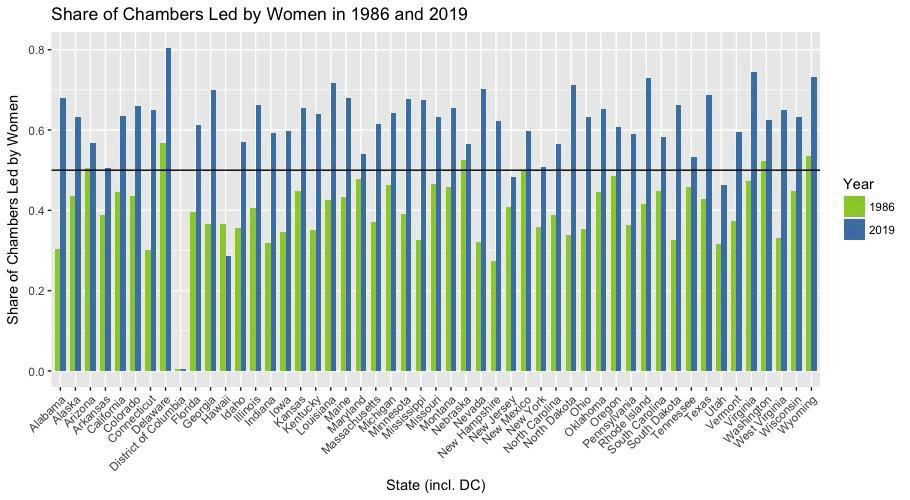 The state graph shows how surprisingly consistent the change toward women’s leadership of chambers has been. By 2019, fully 47 of the 50 states and the District of Columbia had more women chamber leaders than men. (For 1986, by contrast, only five states had more women than men in charge. All were west of the Mississippi: Arizona, Nebraska, Oregon, Washington, and Wyoming.)

Why the increase in women’s leadership? The authors of the study are not inclined to speculate on specific reasons. Yet they can speak to the overall process. “This is coming from the grassroots,” Chris Mead said. “It’s happened with no apparent coordination from anybody. And it seems to have welled up from the smallest chambers first.”

The study compared the data in the first publication of the Loveland, Colorado-based World Chamber of Commerce Directory (1986) with the latest data from the same company (2019). Every chamber leader with a clearly male name (“Roger,” “Fred,” “Joseph”) was classified as a man, and similarly female names (“Angela,” “Jennifer,” “Nancy”) were, unsurprisingly, classified as women. But what about androgynous names such as “Pat,” “Chris,” or “Jan”? These were quantified using Social Security data with the probability of their being male or female and these probabilities were incorporated into the study.

Women are running more chambers, but not all chambers are the same. A large metropolitan chamber can have a budget 100 times that of a small all-volunteer chamber. Those in the field are the first to say that men are often found at the helm of the largest chambers. So the researchers took a separate look at large chambers.

While the 15 female CEOs don’t suggest a wave of women’s leadership of large chambers, in 1986 the situation was more extreme. We have found 68 chambers that are more or less the predecessors of today’s 75 Metro Chambers. (The missing seven are absent from our calculations for various reasons, including that they did not appear in the original 1986 directory, such as the Austin and Detroit chambers, or that a chamber in the 1986 directory was listed but not its CEO.) In that 1986 group of 68 chambers that bear comparison to today’s Metro chambers, only two had women CEOs. That comes to just 2.9 percent of the 68 CEOs we were able to examine for 1986. From the low level of 1986, today’s level of 15, while still small, is a significant jump.

One level down from the Metro Cities in the large-chamber hierarchy of ACCE is the Major Cities Council. It comprises primarily chambers serving areas of 250,000 to 500,000 people and having budgets of $1 million to $2 million. Such chambers, while smaller than the Metro Cities chambers, remain a good deal larger than the typical chamber of commerce in the United States.

As we have seen the national representation of women in chamber leadership pass the 60 percent mark, covering thousands of chambers, there’s no reason to expect we will not find yet more women leading large chambers of commerce down the road. Business leaders specifically, and people in general, have become accustomed to the idea of women taking charge of enterprises of all sizes, including chambers of commerce.

Large and small, chambers of commerce have witnessed an extraordinary period of change in gender leadership over the past 33 years, and nothing we’ve learned while researching the topic suggests that the story is over yet.

Chris Mead is president of Magicians of Main Street, a firm serving chambers of commerce. He worked for more than 16 years at the Association of Chamber of Commerce Executives, finishing as senior vice president. Separately, he wrote the only book-length history of chambers in the United States, ​The Magicians of Main Street: America and its Chambers of Commerce, 1768-1945. ​He holds a B.A. degree in English from Oberlin College and an MBA degree from Stanford University. To contact Chris, call (703) 864-2247 or visit ​www.magiciansofmainstreet.com​.

Greyson Jones is a recent graduate of the University of Virginia, holding a bachelor’s degree in economics.

This study would not have been possible without the kind permission of Kristin Harmon and Sarah Werre of World Chamber of Commerce Directory of Loveland, Colorado. They even trusted the authors with the only remaining copy of the 1986 directory, which the authors of the study copied before returning the original directory back to Harmon and Werre. The Harmon-Werre team also kindly provided digital data for 2019 chambers. To reach them for a copy of their directory, call (970) 663-3231 or go to ​www.chamberdirectoryonline.com​.